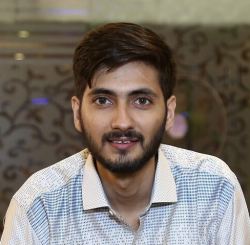 Vishwas Kochar
Vishwas is very passionate about anime and manga. He has read tonnes of manga, manhua, and manhwa as well as watched more than 170 anime. He considers himself an Otaku, and rightfully so. He grew up watching Dragon Ball Z, and his favorite manga is One Piece.

My Hero Academia is a well-executed battle shonen that, while playing to the tropes in the genre, does so well. One thing that makes this series a cut above other superhero stories is its focus on villains. We even have a full-blown arc focused solely on villains! This is rarely ever seen in other manga.

The series has a lot of great villains, Shigaraki, Stain, Overhaul, etc., and to stand up against these villains, we need great heroes. One of the best heroes that Horikoshi has produced in the series is Mirio Togata, also known by his hero name, Lemillion. Through the character of Lemillion, Horikoshi has taught us what makes a hero. This is the Mirio Togata character guide you all have been waiting for.

Mirio at a Glance

My Hero Academia is the story of how Izuku Midoria became a great hero. It is the journey of a quirkless little boy who did not have the strength but the heart to become a hero. After watching Izuku run towards a villain to save Bakugo’s life, All Might chose Izuku as his successor. The next symbol of peace, the next inheritor of One For All.

But before All Might met Izuku, he already had a successor in mind. He planned to give Mirio Togata his quirk, One For All. And after the introduction of Mirio in the story, a big chunk of the fanbase wondered if Mirio was actually a more worthy successor to All Might than Izuku. Even Izuku himself thought about passing One For All to Mirio. You don’t see a side character have this much impact in many stories.

As a child, Mirio was saved from drowning by a Pro Hero. This inspired him to become a hero himself. However, he was both blessed and cursed with the quirk of Permeation. His powerful quirk had the potential to be extraordinary, but if not used with care, it could kill Mirio instead.

Mirio’s dad, who had the same quirk, cautioned him about it. He told Mirio that the reason he gave up on becoming a hero was that he found the quirk difficult to control. But Mirio did not dither. He asked his father to watch him on his journey to become a hero.

And so he trained. He put his heart and soul into training, trying to master his quirk. He was laughed at by other students, but he kept moving forward. He entered the U.A. High School and continued his training. In U.A., he met his mentor Sir Nighteye. And during his hero work-study with Sir Nighteye, Mirio grew by leaps and bounds. Mirio with Tamaki Amajiki and Nejiro Hado became renowned as The Big Three of U.A.

The first time we meet Mirio in the story is the day when The Big Three interact with our heroes in Class 1A. Aizawa invited them to tell the class more about work studies. Mirio introduced himself with a joke that made no one laugh, so he offered the class a chance to fight him to learn how much work-study experience matters.

So everyone in the class gets ready to fight Mirio together, and within a few seconds, Mirio wipes the floor with them. He punches everyone in the gut within a matter of seconds without getting even a single scratch on himself.

On their first day at work, Izuku and Mirio encountered Eri and Overhaul. Little Eri was all bandaged up and was running away, which made Izuku suspicious. He wanted to enquire more about her scars, but Mirio stopped him. Mirio knew that if Overhaul became wary of them now, they would not be able to catch him. Though reluctantly, both of them let Eri go with Overhaul.

This decision to let Eri go came back to bite them when they learned what Overhaul was doing to Eri. They were devastated and vowed to save Eri next time.

During the raid on Shie Hassaikai to capture Overhaul and rescue Eri, Mirio wents ahead of the group by himself. He finds Eri with Overhaul and Kurono and two members of the Eight Bullets- Shin Nemoto and Deodoro Sakai. Mirio fights bravely and almost defeats all his enemies until Shin fires a Quirk-destroying bullet toward Eri. Mirio jumps in front of Eri and takes the bullet for her destroying his quirk in the process.

The most impressive feat in this whole arc is not that Mirio fought and almost won against 4 extremely powerful enemies. It is the fact that even after getting his quirk destroyed, he fought for another five minutes. He protected Eri till help arrived.

During the raid on Shie Hassaikai, Mirio lost not only his quirk but also his mentor Sir Nighteye. On his death bed, Nighteye used his quirk and told Mirio that he would become a fine hero. He asked him to keep smiling as a world without smiles and humor has no bright future.

Currently, in the story, Mirio has got his quirk back. Eri used her quirk on Mirio to restore his quirk. He was last seen fighting the villains in the Paranormal Liberation War.

Mirio is a sturdy-looking young man with a muscular build and blonde hair. Presently in the series, Mirio flaunts his medium-length hair like a pro, but in my personal opinion, the long ponytailed hairstyle he flaunted in middle school looked perfect on him! His plain-looking face reminds me of the comic character Tintin. It’s a shame the production team of MHA did not cast the voice actors of Tintin in dub or sub!

Mirio wears a helmet- Lemilliomet even though he can phase through things! The design of his suit- Lemilliosuit, is based on the hero who saved and inspired Mirio when he was a child. The suit is made out of his hair so that it would stick to him when he phases. He has 1000000 stamped across his chest on his hero suit.

Mirio also dons a cape with his suit. The cape is not just for show, as he proved in his fight to save Eri. Kurono thought Hero capes were just for show. While not all heroes wear capes, some wrap them around scared children to comfort them.

As Mirio himself says:

The reason heroes wear capes is to wrap up and protect little girls in pain!

Mirio can even warp by using his quirk to fall into the ground. Since multiple objects can’t occupy the same space at once, he gets launched out of the ground instantaneously. He can control the angle via his orientation and pose to choose where he gets out. His super move, Phantom Menace, is a result of this warping technique.

As Mina Ashido points out, it is like a glitch in a video game. But it is not an all-powerful quirk. As Mirio states:

I made it into a strong quirk.

When the quirk is active, Mirio can not breathe. He cannot hear anything, and he cannot see anything. All he can feel is a sensation of falling endlessly. To just pass through one wall requires immaculate control of his quirk.

Mirio has a very optimistic attitude and can always be found smiling. As Mirio himself quotes Sir Nighteye:

“A world without smiles and humor has no bright future.” No offense intended, buddy! That’s just my motto.

Even after all the hardships, Mirio has faced being able to say something like this, Mirio’s positive attitude should be considered a quirk in itself.

Mirio Togata is the quintessence of evolving past one’s own flaws and making do with what you have. Not only did Mirio spend years trying to master his quirk, but when he lost his quirk, he protected Eri quirkless through sheer willpower and determination. As he tells Overhaul:

None of what I’ve done was a waste! I’m still Lemillion.

It is not his quirk that made him Lemillon. It is his determination and hard work.

Mirio was born to be a hero. In my opinion, even All Might falls short in comparison to Mirio when it comes to endurance, perseverance, and radiant positivity. A true hero’s hero.

Mirio’s name is a play on the word million, and his surname Togata means to pass through. He chose the hero name Lemillion because he wanted to save a million people. He said he wasn’t ready to put All before his name yet. He also believes his hero name also sounds like the name of the Japanese rock band Remioromen.

Question: What is Mirio’s dad’s quirk?

Answer: Mirio’s dad has the same quirk as his son- Permeation. He is unable to control his quirk to the degree that Mirio can. This is why he gave up on becoming a hero.

Question: Are Mirio and Tamaki together?

Answer: Mirio and Tamaki are childhood friends. They trained together and became The Big Three with Nejiro. Mirio is the one who gave Tamaki his hero name- Suneater.

Question: Did Mirio/Lemillion get his quirk back?

Answer: Yes, in chapter 292 of the manga, Lemillion can be seen making his reappearance in the story after getting his quirk restored by Eri.

In a series with hundreds of heroes carrying hundreds of exciting quirks, it is challenging to make a particular hero stand out. But one character, one hero that stands out among all these heroes, is Mirio, aka Lemillion. One of the most badass moments in the series is seeing Mirio, after losing his quirk, still kicking Overhaul’s butt all over the place.

But I do believe Horikoshi hurried his character arc after the U.A. school festival. I would have loved to see the progress of Eri in controlling her quirk and Mirio’s hero life as a quirkless person. Even still, Lemillion has a special place in my heart as the noblest hero in My Hero Academia.